Bleeding Gum Problems: What Does This Say about Your Dental Health?
Tweet

Bleeding Gum Problems: What Does This Say about Your Dental Health?
Tweet 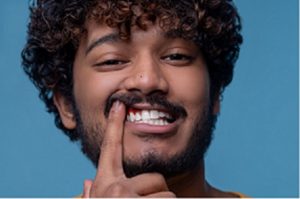 Bleeding gums are a good indicator that something is amiss with your dental and oral health. While a little bit of blood in the sink can typically be chalked up to aggressive brushing or flossing, consistent bleeding should be a cause for concern. It’s important to understand why your gums are bleeding and what you can do about it. Keep reading to learn about common bleeding gum problems, causes, and prevention tips.

What Do Bleeding Gums Mean?

Simply put, bleeding gum problems are typically a sign of poor dental hygiene and infection. Failing to maintain proper dental and oral hygiene can increase your risk of infection, which leads to inflammation, redness, tenderness and eventually bleeding. Inflamed gums are extremely tender to the touch and can start to bleed even at the slightest contact.

Depending on the severity and the other symptoms involved, bleeding gums can be a symptom of the early or advanced stages of gum disease such as gingivitis or periodontitis.

What Are Some Common Bleeding Gum Causes?

There are a number of different factors that can contribute to bleeding gums, some of which are habitual and others that are symptoms of underlying health issues.

Gum disease is such a common occurrence in most adults, that it can be easy to ignore until it progresses to a more serious problem. Gingivitis is an early form of gum disease that’s caused by a bacterial infection in the gum pockets and oral cavity as a result of poor oral hygiene. Bleeding gums is just one of many symptoms. Other symptoms include inflammation, redness and tenderness. Failing to brush and floss your teeth on a regular basis creates an ideal breeding ground for harmful food-borne bacteria to flourish.

If left untreated gingivitis can eventually progress into a much more serious type of gum disease known as periodontitis, which impacts your dental and overall health.

Using the proper dental equipment for brushing and flossing your teeth is just as important as maintaining a regular at-home dental routine. Some toothbrushes have extremely rough or harsh bristles that can wear down your tooth enamel and cause gum recession. The recommendation is to use a soft-bristled toothbrush.

The wrong brushing and flossing techniques can also do more harm than good. Maneuver your toothbrush gently starting at your gum line and moving in the opposite direction. Never brush toward your gum line as this pushes it backward and can cause it to recede, which leads to bleeding, infection, and other issues.

The same goes for flossing. Whether you’re using a string floss or pick, make sure to gently insert it in the space between your teeth and gingerly move it up and down at least 5 or 6 times to loosen stuck-on food particles.

A vitamin C deficiency is another reason you could be experiencing bleeding gums or even loose teeth. Vitamin C strengthens the connective tissue in your gums that hold your teeth in place. If you have a vitamin C deficiency then you may want to consider changing your diet or taking daily supplements to increase your intake.

Vitamin K3 is also crucial to your dental health because it supports remineralization, balances the oral microbiome and helps stave off cavity-causing bacteria in the mouth.

Foods that are rich in vitamin C and K include citrus fruits like lemons, oranges, spinach, kale, and leafy green veggies. Try including these in your daily diet and see if they make a difference.

Hormonal changes during puberty or pregnancy can also lead to significant vitamin and nutrient deficiencies in the body. One of the many common symptoms of these vitamin deficiencies is bleeding gum problems. If you have a blood disorder or take blood thinners on a regular basis, then this can also result in more sensitive gums and bleeding.

Talk to your dentist about possible solutions if you’re experiencing bleeding gum problems as a direct result of hormonal changes or as a side effect of any medications you’re on.

The best way to prevent your gums from bleeding is to simply take good care of your dental health. Sometimes, that means making healthy choices and breaking certain bad or unhealthy habits that can deteriorate your teeth and gums. Here are a few things you can do to take better care of your gums and prevent them from bleeding due to infections such as periodontal disease.

Smoking or chewing tobacco is one of the worst things you can do for your health. Cigarettes contain thousands of toxins that enter into your system and deplete the oxygen in your bloodstream. Depriving organs throughout your body of oxygen prevents healthy cell regeneration and can even lead to organ failure in some cases. These toxins also cause tooth discolouration, decay, and the suction effect of inhaling and exhaling cigarette or cigar smoke can encourage bleeding.

Rinse Your Mouth Out Regularly

Every time you eat something, whether it’s a snack or a meal, remnants of your food can get stuck in between your teeth. Throughout the day these food particles slowly break down and start to breed bacteria that can wear down your tooth enamel and cause infections in your mouth. Dentists advise that you rinse your mouth out with warm water after every meal to help loosen and remove these food particles, so they don’t stay in your mouth all day. And brush your teeth as soon as possible.

The best way to maintain healthy teeth and gums is to have a consistent dental hygiene routine in place. It should include brushing your teeth at least twice a day—once in the morning and once in the evening. If you can fit in a third lunchtime teeth brushing session in the middle of the day, then that’s good too. Just don’t overdo it.

Flossing should also be a part of your dental health routine. Try to floss at least once or twice a day to remove stuck-on food particles between your teeth. As an added measure of protection against bacterial infections, you can also include mouthwash in your routine. Rinse your mouth out once in the morning when you wake up and once before going to bed at night to freshen up your breath.

Schedule an Appointment with a Family Dentist in Etobicoke

Looking for quality dental services in Toronto and the GTA? Princeview Dental Group will treat bleeding gum issues, teeth whitening, cosmetic dentistry, emergency dental treatments as well as routine dental treatment to help keep your teeth and mouth healthy. Our friendly staff will always greet you with a smile. Book your appointment today!