Causes and Solutions for Bleeding Gums While Flossing
Tweet

Causes and Solutions for Bleeding Gums While Flossing
Tweet 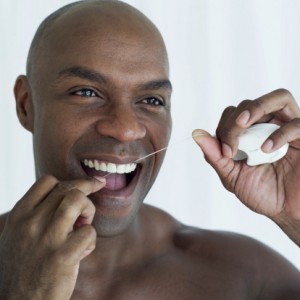 You may have noticed that your gums start to bleed when you floss, which is a potential cause for concern. This may even happen if you floss regularly but are using poor technique. Don’t be alarmed just yet; just because your gums are bleeding it doesn’t necessarily mean you should seek dental care service.

It’s not a normal occurrence for your gums to bleed during or after flossing. However, it also doesn’t mean you should stop flossing altogether, as many patients do.

Bleeding gums may be caused by an inflammation, gum disease, or gingivitis, and if you stop flossing, it could just make things worse. If you floss every day and use a gentle technique, the bleeding should stop after a few days; if it persists, it is recommended that you seek dental health services.

One of the most common causes of bleeding gums is gum disease. This is something you should bring up with your dental specialist immediately if bleeding gums persist, even if you take all the precautions.

Other symptoms of gum disease include loose and shifting teeth, pus between the teeth, bad breath, changes in the bite pattern, receding gums, and sensitivity to hot and cold. If caught early enough, gum disease can be treated.

One of the worst habits you should avoid when it comes to practicing good dental hygiene is not flossing every day, as flossing removes food particles and bacteria that regular brushing misses. In addition, as noted, people who don’t floss regularly often develop gum disease.

How to Prevent Your Gums from Bleeding

Preventing bleeding gums is surprisingly easy. Dental health services recommend practicing good oral hygiene, which includes brushing at least twice a day, flossing at least once a day, rinsing with an antiseptic mouthwash, and, most importantly, visiting a dental specialist every six months. Regular visits to your dentist can catch any issues with your teeth before they become a problem. They can also show you the proper technique for brushing and flossing if you are not doing it properly.

At Princeview Dental, we provide gentle and effective dental care service. Our staff will teach you the proper technique for flossing and provide regular cleanings and x-rays. We can also recommend the best brands of floss to use that will effectively clean between your teeth and prevent gum disease. Contact us to find out more!